Do you like gravel, good weather, the Shenandoah Valley, and the George Washington National Forest? Of course you do, because you have a soul. What about West Virginia? Check. Rural convenience stores? Check. Mountain climbs and sketchy-yet sublime descents? CHECK-MATE!

Guess what? I have a GREAT ride for you. It’s called Hell of the South and I have no idea why it’s called that other than it takes place in the rural south and at times…is absolute hell. But really, it’s a great ride!

I have been talking about doing Hell for about a year, ever since I was introduced to the shorter “easier” version by a few friends in 2016. The biggest difference is that the shorter version (Heck of the South) starts in the Shenandoah Valley, while Hell makes you cross a mountain to get to the valley (which you then have to cross again to get to your car).

With the kids on spring break and the family in full-on staycation mode, I took advantage of a rare mid-week chance to ride and met Vin and Brian early Thursday morning. We started near Elizabeth Furnace at the Signal Knob parking lot (about an 75 minutes from DC). The route starts off beautifully as you roll along Passage Creek for about forty-five minutes. 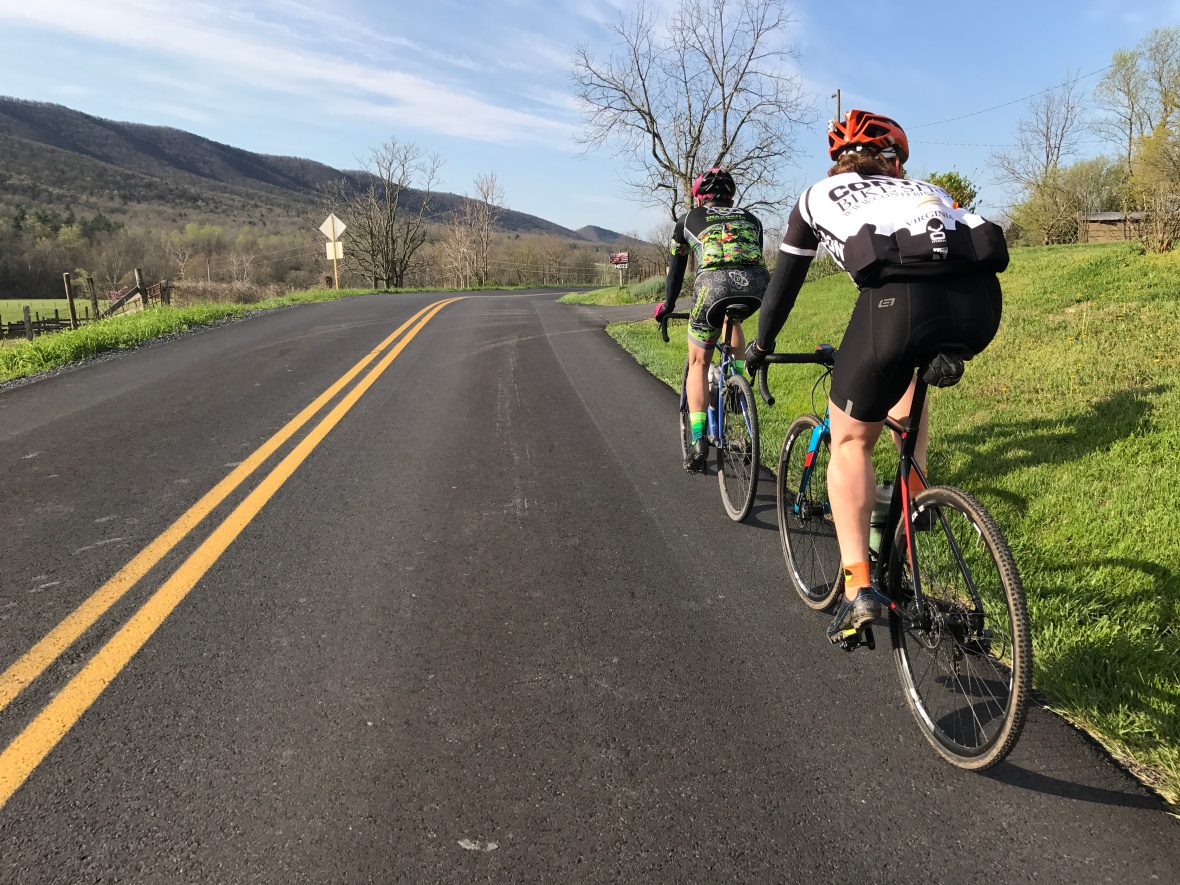 Vin and Brian lead the way along Fort Valley Road.

There is a lot of road and probably an equal amount of gravel, so I went with my Kona Major Jake and ran Clement X’plor MSO 32s. Vin and Brian were set up essentially the same although Vin was running a 1x gearing and my tires were on backwards. Why were my tires mounted backwards? Because I am a fucking idiot, that’s why.

Pretty soon we were on gravel going up the first climb to Woodstock Tower. This was the starter pack climb – about 1,000 feet over 4 miles or so. Enough to get you breathing hard, which would be good practice for later on. With a successful push to the top and beautiful views it was time for something bad to happen, so Brian flatted and I got an excuse to rest some more.

The gravel descent from Woodstock Tower is sketchy at best, lots of switchbacks which have been paved but are either crumbling or covered in gravel. I pretty much rode my brakes all the way down to the valley floor because I suck at bike handling. When I finally caught up, Brian took pity on me and adjusted my brakes so I could get off my hoods and at least brake from the drops. That made a huge difference and reminded everyone that, once again, I know fuck-all about bicycles.

The weather was perfect that day and the 20 mile trip through the valley was serene. You cross the north fork of the Shenandoah River and pass through the town of Woodstock and then it gets hugely rural. Lots of Confederate flags and dogs and trailers. Stuff you just don’t see a lot of in NoVa (well dogs, but not unleashed divebombing-your-legs dogs). It’s actually not that bad, and we didn’t have a single problem with anyone. And you just could not beat the views.

Then you see this and warm fuzzies time is over.

Crooked Run Road is a climb that takes you 4+ miles and 1,600+ feet to the top of the second mountain crossing of the day. It’s gravelly and switchy and it NEVER FUCKING ENDS. Or maybe it just seems that way. I do remember standing up and pedaling a lot because I was so tired of grinding. Every time I would go around a turn I would expect to see the power station at the top of the mountain and I swear it was like five or six brutal mini climbs until it actually showed up. I am also running an 11x25t cassette in the back on my Jake so maybe I should bump that up a little. More idiocy on my part.

Anyway, as brutal as the climb was, the descent is just the opposite. Mostly gradual but steep enough that you get 30+ mph and can spray some gravel. It reminds me of a long ski run out west, with miles of zen-like coasting. 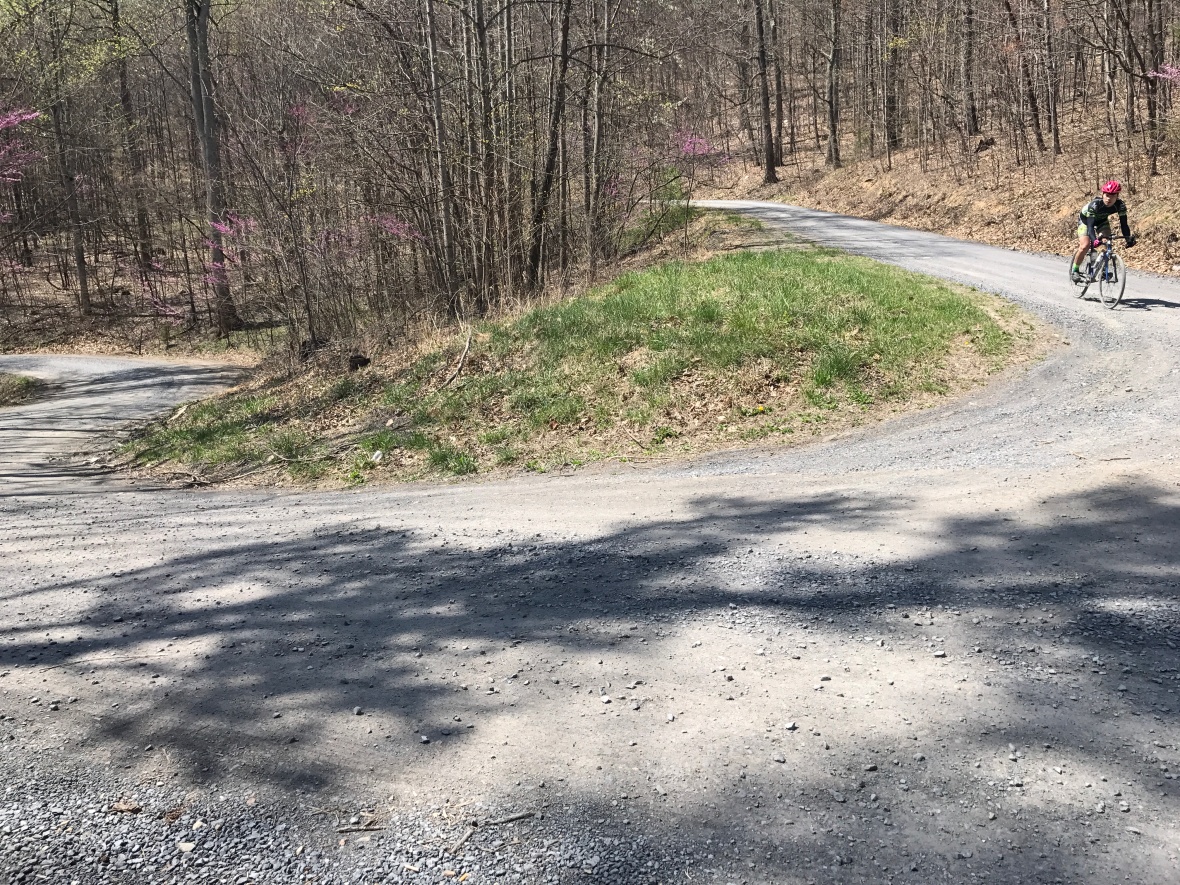 The backside of the Crooked Run climb was lovely. As is Vin.

Once you get over that second mountain you are in wild and wonderful West Virginia, which means, most importantly, a lovely oasis of a convenience store. It’s about halfway through the ride and a good break point to stock up on trash food (pretzels, m&ms, and a payday for me, thanks).

After mainlining about 800 quick calories, you meander around the countryside for 10 miles before it’s time to climb back out of West Virginia via Judge Rye Road. It’s the longest climb of the ride at 4.8 miles and clocks in at a little over 1,400 feet. The Strava segment top 10 for this section has names of pros like Dombrowski and Bishop and after looking at their times well…those dudes are not human.

The payoff for the climb is maybe the best part of the whole ride – a sweeping, smooth descent along a ridge through George Washington National Forest. I wish I had taken pictures but I was so enamored with the vistas and the beauty and the ride I controlled myself for once and left my phone in my back pocket and enjoyed the world around me.

I tried so hard to soak everything in. I wanted to remember everything I was seeing and did everything I could to commit it all to memory. All of it. Unless you have a photographic memory though, it’s impossible and sometimes I wonder how many beautiful things I have seen but long since forgotten.

As we cut back across the valley, the miles and the climbing were adding up and I was winding down, hard. When we hit Woodstock, I was wiped out and it occurred to me that in order to get to our cars, we would have to go back up the same steep, sketchy route that we had taken to get down into the valley. 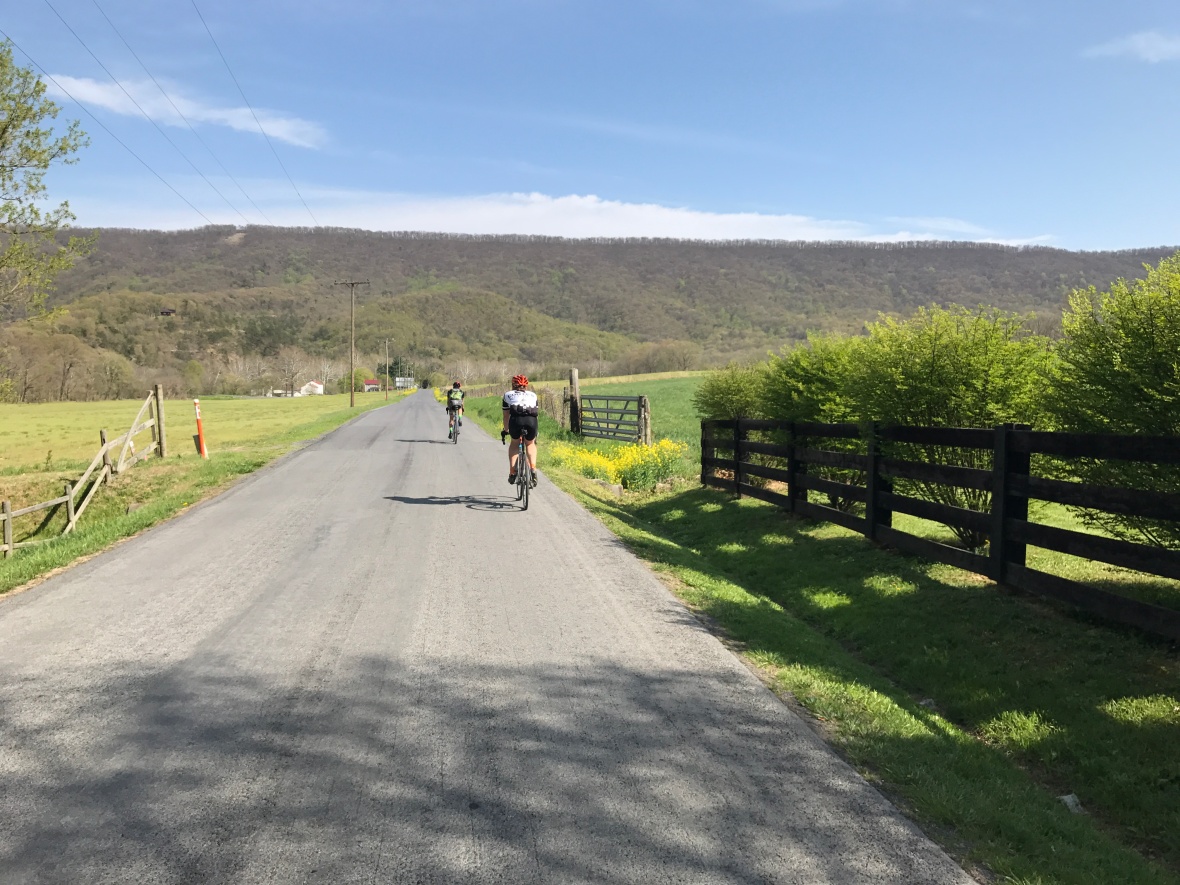 One more mountain climb and we would be home free!

We made the wise decision to pit stop at a Sheetz before the climb. Fortified with additional garbage-ass convenience store food I felt like I had just imbibed an extremely healthy energy smoothie (if that smoothie had been made of refined sugar and salt and white flour and coke zero).

I think Brian asked me if I wanted to hang out and they could drive back over to pick me up, to which I overly-dramatically responded that I would die on that climb before I would accept a ride back to the car. I was kidding of course but in my depleted state I probably sounded disturbingly earnest and forthright about it. I mean, I can easily die on the climb just doing something stupid. I don’t need a reason.

The climb back up to Woodstock Tower is about 2 miles and 1,100 feet of climbing, but the switchbacks make it a little more doable. It’s just a grind, but you put your head down and you do it and it’s over. Here’s a scene from the ride right after that segment:

Me: That climb wasn’t so bad!
Brian: Fuck you.

The gravel descent back down from Woodstock Tower was superb. It was the perfect reward for what was a pretty tough climb. The last ten miles to the car were just boring awe-inspiring run-of-the-mill beauty. No big deal.

The red buds were out in full force and basically the whole day looked like this. Sad!

All told we knocked out just south of 100 miles and 10,000 feet of climbing. There were four big mountain climbs, one of which I would categorize as ridiculous, two were hard, one was average. They were all worth it though, because the gravel descents, on the whole, were amazing. It’s one of the more rewarding rides I’ve ever done and I can’t wait to go back.

You should definitely do it!

This site uses Akismet to reduce spam. Learn how your comment data is processed.

What people read most while pretending to work

Some Other Ultra Blogs

Stupid stuff I want to do

Please say a little prayer for our beloved Zoe. This 4 year old sweetheart was diagnosed yesterday with “very aggressive” Stage 3 lymphoma. The prognosis is awful but we are visiting an oncologist Friday to see if there is a sliver of hope somewhere for her. After losing our last pup, Lola, to cancer at the end of 2019, this just feels unnecessarily unfair and cruel. This is Zoe, today, still smiley and chill, despite it all. Our sweet, cuddly girl. ❤️
missed these commutes #nofilter
Very solid hike with Beebs and Zoe! River trail was amazing, Zoe kept trying to cliff dive!
Happy TWENTIETH birthday to Jake Shue and Happy TWENTIETH birthday to Ryan Shue. Love you and can’t wait until you’re home so we can celebrate! 🥳❤️🫡
Loading Comments...
%d bloggers like this: